Anthology for Listening Vol. I. REFSHALEBLOMSTER

This is a site specific and geolocated soundsscape for you to move around in.

The soundscape is situated behind the B&W halls, where it explore the space and sounds of the site.

To experience the work and move around it you must download the app echo and follow the guidance. Each experience of the work generate as unique version due to you tempo, movements and sense of the space.

Audio samples from the soundsscape: 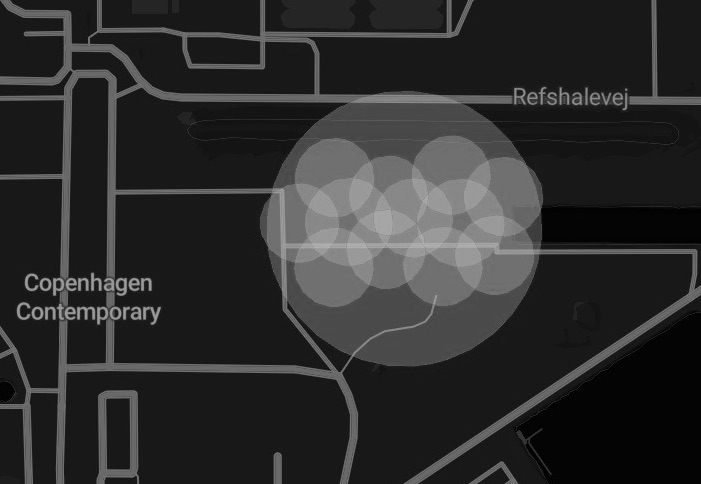 Map over soundzones within the soundscape for the listener to move between.

The Refshaleøen area, near Copenhagen, is dominated by a colossal building at its centre. A beacon, a church, a testament to industry. It has a gravitational pull. It contains (who knows what?) and it excludes. Before I had seen inside, it was a hulking metal façade that contained and protected a hidden world inside. With microphone in hand and headphones on, I sought out small crevices in the building out of which spilled sounds and noises. Some were angelic offerings (perhaps a voice from somewhere, from another time) and some were metallic aggression (from some unseen depth). In an attempt to leave a trace of my ephemeral act of listening, I left behind small green squares. Not so much X as square marks the spot. I wonder if they are still there. I wonder if others could stand in those places and hear what I heard. To listen is to wonder.

Working with sound as my primary material, my listening is about proposing a future life for a sound to create a new opportunity for listening later on for someone else. Part of this task of proposing is about recognising. Recognising where a sound comes from and what it could signify (yes), but more recognising what sounds could be – what they might come to mean, how they might be combined, and how they might construct an imagined, illusory world that could well change how someone hears this landscape (with its gravel, grasses, metal, trees). In making this proposal for future listening, I have the responsibility sometimes to preserve the sound I have encountered to allow people to hear it just as it is. But I also have an opportunity to intervene, to shape a sound as a means of nudging others to hear something I have heard while also taking care to keep it connected to its recognisable origin.

The geolocated sound experience of Refshaleblomster is a proposal for listening to the vast Refshaleøen slipway, where freshly hewn ships once lurched their way out to sea, in a different way. I overlay different landscapes of grass and birch trees (landscapes that surround this place, could once have been here, and may be here again) to counterpoint the harsh concrete and gravel underfoot. I suggest a cinematic view of the building, with its epic scale, with angelic sweeping synths that sang to me through the abandoned pipes and doorways that punctuate the building. I animate the concentric circles of the boy-racer donuts with faint pumping beats that may once have fuelled the pure joy of speed. I share a live improvised solo gig (when I managed to infiltrate the building) between me, the synths I made from the sounds of this place, the acoustic reverberance of the building and – briefly – as a duet with the forklift truck guy going about his business.

With a phone in hand and headphones on, the listener constructs their own musical experience by traversing this seemingly empty space. Fenceless and with only distant points of reference, the vastness of the space becomes a blank canvas onto which I have cultivated two blooms of sound. Concentric circles that overlap and represent sonic zones to be encountered. The listener’s location triggers different sounds, invites different ways of hearing the landscape, of hearing the sounds that came from there (curated by me) and that now become a new landscape.

To listen is to project a possible future.