Phase XII – To Listen As If Already Listening

Angelica’s research concerns the notion of passivity considered as a way-of-being, in relation to Ancient Greek thought and language and continental thinkers such as Merleau-Ponty and Heidegger.

To Listen As If Already Listening

Published by Bureau for Listening

To Listen As If Already Listening

The ears are a comparatively passive perceptive organ. They lack the eyes’ capacity to shut, and the mouth’s propensity to close. Our ears are destined to remain perpetually open. Openness points to a passive way of being toward the world. To be open, Stephen Pluhacek writes in his conversation with Luce Irigaray “does not depend upon any action or decision (by a subject). (…) To be open to/by the other is to be surprised; is to be infinitely passive before the other.”[1]

Our ears, as such, bring attention to our inherent capacity to submit. They teach us to receive. But is this receptivity, this openness, the same as listening? Is listening a passive filtering of sounds and silences? Or, does listening have to be active to distinguish itself from mere hearing?

Since passivity has earned a bad reputation in Western culture, activity sometimes becomes a prefix with which to endow passive phenomena so as to indicate their use-value. “Active” listening is thus a way of demarcating a good, attentive form of listening, opposed to passive listening, which in fact might not be listening at all, but a lesser form of indiscriminate hearing.

Instead of this moral distinction of good and bad listening, I would like to suggest that listening is an experience of passivity that everyone has an experience of. To listen as if already listening is to be ontologically disposed to listen. In that way, listening is not only an active ability, but a passive modality. However, even as we shy away from morals we are due to account for the ethics at play in this phenomenon. Listening does not exist outside of current power structures: those who listen the most are those who are listened to the least.

Some of the worst listeners are philosophers. The first time I was introduced to Plato’s Dialogues as a student of philosophy, I was excited at the prospect of conversation being the medium for a philosophical argument. Rather than the all-knowing subject, the I, who establishes his truths as the truth, I thought I may be let in on a collaborative thought-process of intermittent speakers and listeners. But reading Plato, it became clear that true dialogues are rare. Instead we listen to a monologue boasted by a choir of supporting actors, or listeners. Socrates speaks, the others mark their active listening by regular remarks, such as:

— It looks that way.

—Yes, by Zeus, Socrates, nothing could be more conclusive.[2]

If this is active listening, then what is so good about it?

In his book Listening, Jean-Luc Nancy wonders if the philosopher at all is capable of listening, or if he is rather always geared toward understanding. Listening is something that happens in between the giver and the receiver, whereas understanding is contained in the knower: an extraction of the known. “To be listening”, Jean Luce Nancy writes, “is always to be on the edge of meaning”.[3] And bordering the unknown is an edgy, uncomfortable state for those who pride themselves with knowing.

Those who listen the least are also those who hesitate the least.

In order to truly listen, the philosopher, as Alia Al-Saji writes, must wait, must hesitate.

Feminine beings and other marginalized subjects do not, like the Philosopher, have to learn to become better listeners. We are always already, as Valerie Solanas writes in her SCUM Manifesto, far to prone to listen to the boring chatter by boring men:

Daddy’s Girl, passive, adaptable, respectful of and in awe of the male, allows him to impose his hideously dull chatter on her. This is not too difficult for her, as the tension and anxiety, the lack of cool, the insecurity and self-doubt, the unsureness of her own feelings and sensations that Daddy instilled in her make her perceptions superficial and render her unable to see that the male’s babble is babble.[4]

Daddy’s Girls for Solanas are women who are permeated with hesitation, and who for this reason still listen to, and engage in, Daddy’s “conversation”, in Socratic “dialogues” wherein they constitute the choir:

— It looks that way.

—Yes, by God, Daddy, nothing could be more conclusive.

Passivity, as well as listening and hesitation, are in this context negative states for Solanas that women are subjected to by men. But passivity, I suggest, can also be a liberatory horizon when it is recognized as a way of being by and for marginalized subjects.

Listening to the hesitant other requires patience: not expecting to be presented with all central ideas in their first sentence; as well as curiosity: finding meaning in the meaningless (in)audible intervals that string syllables into sentences.

— What do you think?

Besides reducing ones hire-ability, hesitation also affects the subjects live-ability.

In her analysis of the 2017 travel bans in North America, Alia Al-Saji offers a concrete example of the relation between hesitation and racial bias. Hesitation was something that people with certain passports could not afford moving in and out of the US at this time. Al-Saji writes:

With a passport (or nationality) comes the heaviness of an atmosphere, a shortening of breath, a feeling of nausea and of enclosure. Its borderlines configure the imaginary infrastructure of a world to which one’s belonging is perpetually deferred. This hesitating breath cannot allow itself to become panic. One must present a calm demeanor and an open smile to border agents; clothing and accent are being scrutinized. There is a lucidity here—one is not dupe to the meaning of borders—yet one trembles underneath.[5]

As is true for all phenomena that stem from passivity, hesitation remains deeply intertwined with its painful pasts. Yet, despite having experienced the weight of hesitation, Al-Saji suggests that it is through hesitation, rather than a simplified understanding of agency, that minoritarian subjects can come to reshape their role in society.

With hesitation, indeterminacy is introduced into habit. This can teach us lessons about ourselves and our world that active reasoning has toiled yet failed at implementing: hesitation allows us to feel and to be together differently. Hesitation invites us to question our habitual ways of understanding the world and to carve out time and space for listening to other ways of understanding this same world.

So, maybe listening, dear listeners, could be modeled on something other than a Socratic dialogue where one speaks, and the others listen actively, attentively, quietly, obediently.  Beyond both dia and mono, a wholly different logue, where listening, like its attendant speech, would be more passive, curious, open, indeterminate. As such, we conclude with a tentative yet hopeful reminder: those who hesitate the most listen the most.

[5] Alia Al-Saji, “SPEP Co-Director’s Address: Hesitation as Philosophical Method—Travel Bans, Colonial Durations, and the Affective Weight of the Past”, Journal of Speculative Philosophy 32, no. 3 (2018): 335. 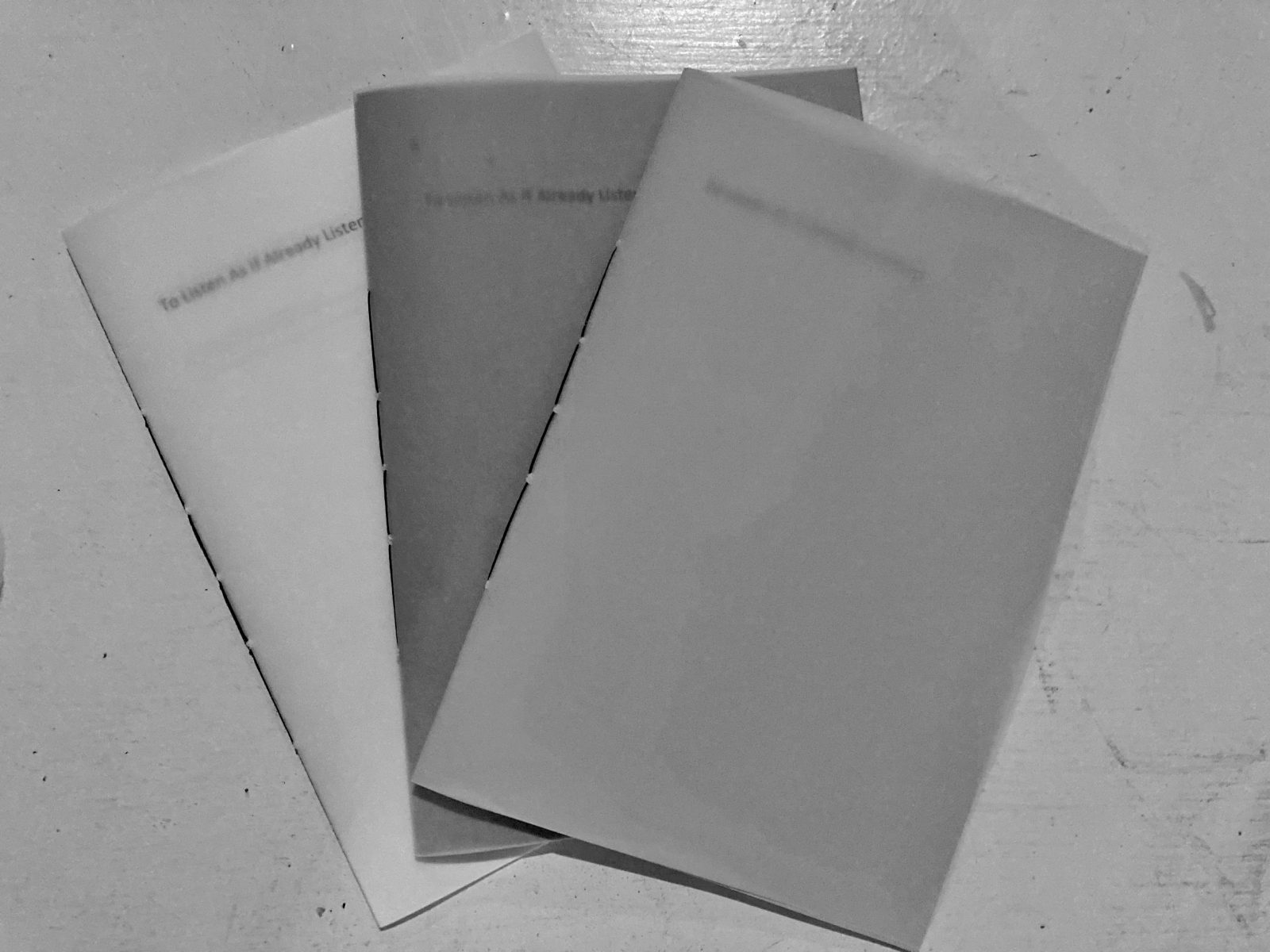 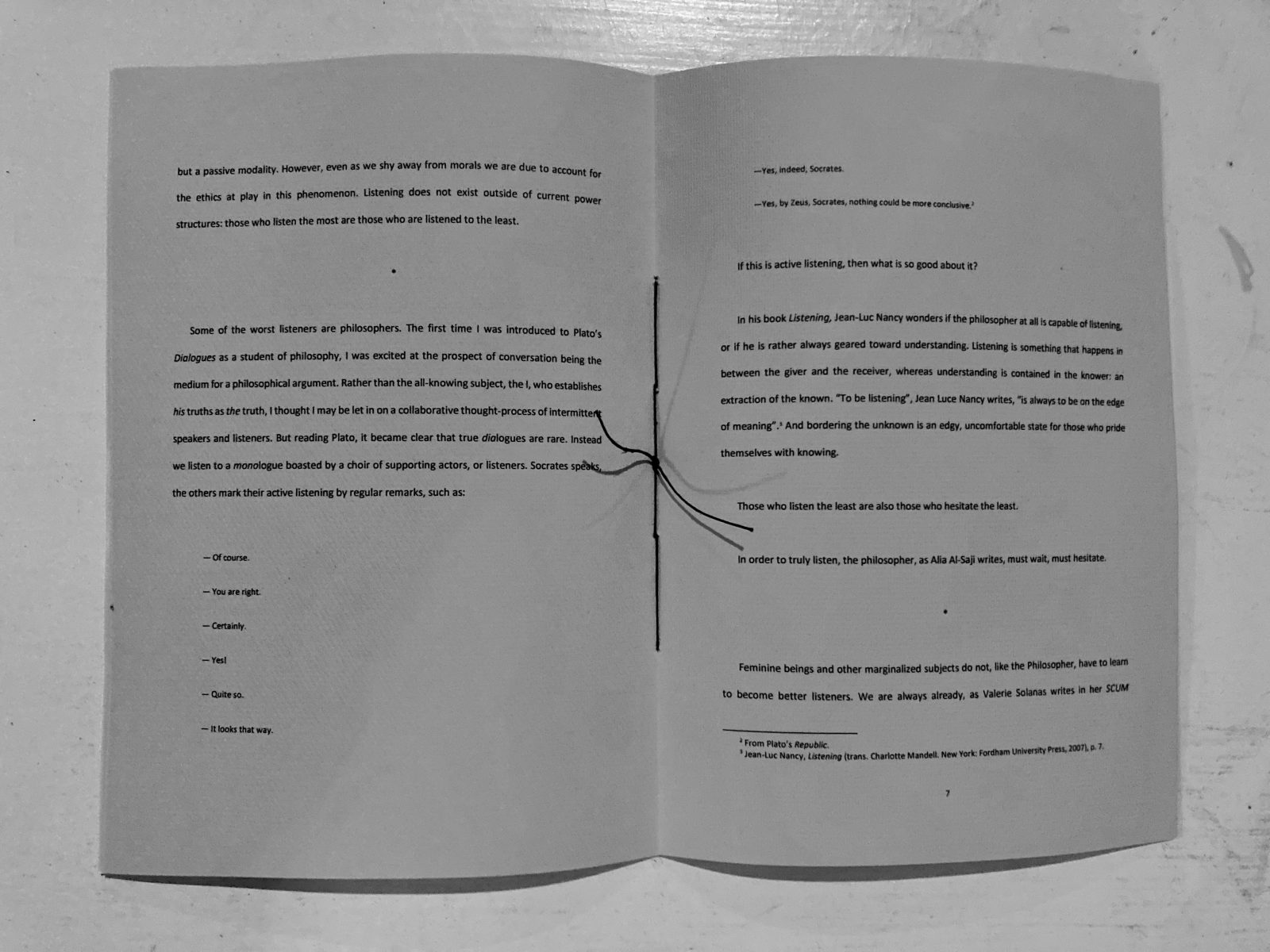